Nigeria’s telecom giant, MTN have revealed that the unlimited data service that had become a hallmark of BlackBerry devices in most African countries will not be offered with the BlackBerry Z10 on network.

MTN gave the warning to customers that devices running on the new BlackBerry 10 platform will not support the existing BlackBerry Internet Service (BIS) data packages.

Previously there was some industry speculation that certain BlackBerry services, particularly BlackBerry Messenger (BBM), might remain unlimited even if all other data use is capped.

Older BlackBerry devices need a subscription to BlackBerry Internet Service (BIS) for features such as BBM and e-mail to work.

MTN has then released three (3) data plans for its blackberry 10 devices called BB10 lite , BB10 MiDi and the BB10 Maxi . All with options of weekly plan or monthly plan. (See plans details below).

The worry about the BB10 plans is the data cap, considering that same network provider gives unlimited data to older Blackberry devices for 1,500 Naira, while for the BB10 customers will have to pay 3,000 Naira to get 1GB of data.

Today (22nd February, 2013) marks the end of the pre-ordering of blackberry z10 from MTN in Nigeria and we expect to start getting the phones anytime from now.

Pre-ordering the blackberry z10 is also available by other networks but the data plan for them is yet to be known. 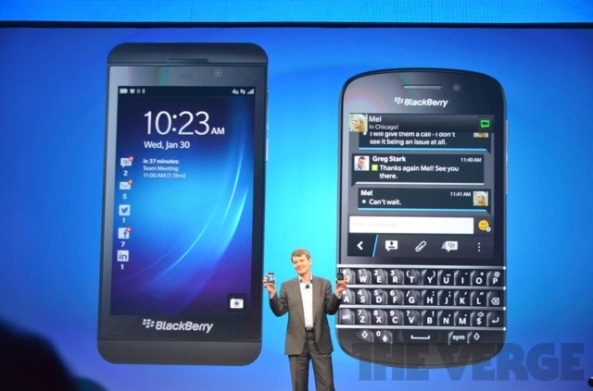 Research in Motion has officially released the q10 and z10 in their Blackberry Smartphone series.

According to the Managing Director, Alexandra Zagury, the two new releases are distinctive improvements on the previous productions.

We are hoping their words will be their bond this time.

Lenovo has downplayed reports that the company plans to buy Research In Motion, saying that it is instead looking at acquisition opportunities in general.

If Lenovo does indeed decide it wants to court RIM, it may face significant regulatory hurdles. Canadian Minister of Finance Jim Flaherty said last week that a Lenovo-RIM deal is something the government “would look at carefully.” Flaherty also responded “absolutely” when asked whether some local technologies are off-limits to potential overseas buyers. END_OF_DOCUMENT_TOKEN_TO_BE_REPLACED